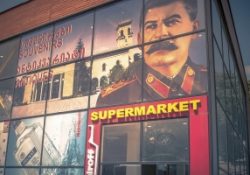 If you are in a revolutionary mood; we have selected 3 spots in Tbilisi and surroundings for you to follow the footsteps of young Stalin

On December 18, 1878, Ioseb Jughashvili, better known to the world under the self-adopted nickname “Stalin” was born in the small town of Gori in central Georgia.

The Joseph stalin museum is now one of the most popular attractions in the city. The museum is full of memorabilia and historical documents including the death mask of Stalin. It probably will let most visitors leave with a mixed taste in their mouths.  Conveniently any mentioning of the dark side of the Soviet regime is missing.Another great highlight of this very controversial museum is a visit to Stalin’s personal railway carriage.  The green Pullman wagon, parked right in front of the museum,  brought Stalin to the Yalta conference. It is armoured and weighs over 83 tons.

Freedom Square, formerly known as Yerevan – and later as Lenin Square during the Soviet Union times, was the stage of one of the biggest bank heists at the start of the 20th century.

On June 26, 1907 the Bolsheviks, lead by young Joseph Stalin, did a robbery of the State Bank of the Russian Empire in Tbilisi. They did so in order to support their revolution. Using guns and hand grenades, a handful of revolutionaries attacked one of the bank’s horse coaches which was transporting money in Yerevan Square to the bank, killing forty people and several horses in the process. The robbers escaped with 341,000 rubles, now the equivalent of 3.86 million USD. But despite the successful heist the Bolsheviks were unable to use most of the bank notes because the serial numbers were known to the police.

From 1903 to 1906 the Bolsheviks printed thousands of trilingual brochures (Georgian, Russian, and Armenian) on an old German press. Today the complex, still owned by the Georgian communist party, is, due to lack of money, in a very dire condition and in need of immediate restorations

Check out the map below to plan your route for a tour of the best Soviet milstones of Tbilisi and surrounding, or join us along our Tbilisi ‘s Soviet Concrete Walking Tour for more discovers !.