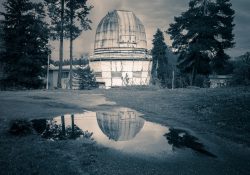 The development of the Abastumani observatory is mainly associated with the life of the Grand Duke George Alexandrovich, the brother of the future Tsar Nicholas II, who had retired in the Georgian’s Meskheti mountains due to his poor breathing condition.The purity and the stability of the air in the Abastumani mountains were not only beneficial to his lungs but also for night sky observation. As an amateur astronomer he lead the construction of a small observatory on the site in 1892, making it the first permanent telescope of the Russian empire. Unfortunately he died unexpectedly in Abastumani on  August 9, 1899 at the age of 28.

At the beginning of the 20th century the Grand Duke George Observatory, as a scientific object, virtually ceased to exist. The aftermath of the revolution and in 1918 the occupation of Abastumani by Turkish military made it impossible to maintain the first Soviet observatory.
It was not until February 8, 1932  that scientific life in Abastumani restarted with  a resolution of the Soviet of the People’s Commissars leading to the foundation of the Astrophysical Observatory of Abastumani with the 24 years old Eugene Kharadze as its director.
As part of the major space race between the Soviet Union and the USA 14 telescopes  were set up  by the Soviet regime through the years. More than 250 people worked and lived with their families in this restricted area until the fall of the Soviet Union.

The unstable times during the 1990’s with its civil wars, unstable power supplies and lack of money made it almost impossible to operate and maintain the observatory. Of the 14 original telescopes only 2 are still in use. Thank to a handful of dedicated and highly motivated scientists the observatory is still operational. It is mainly focussed on near earth objects and binary solar systems. It has published many important discoveries in internationally acclaimed scientific magazines.